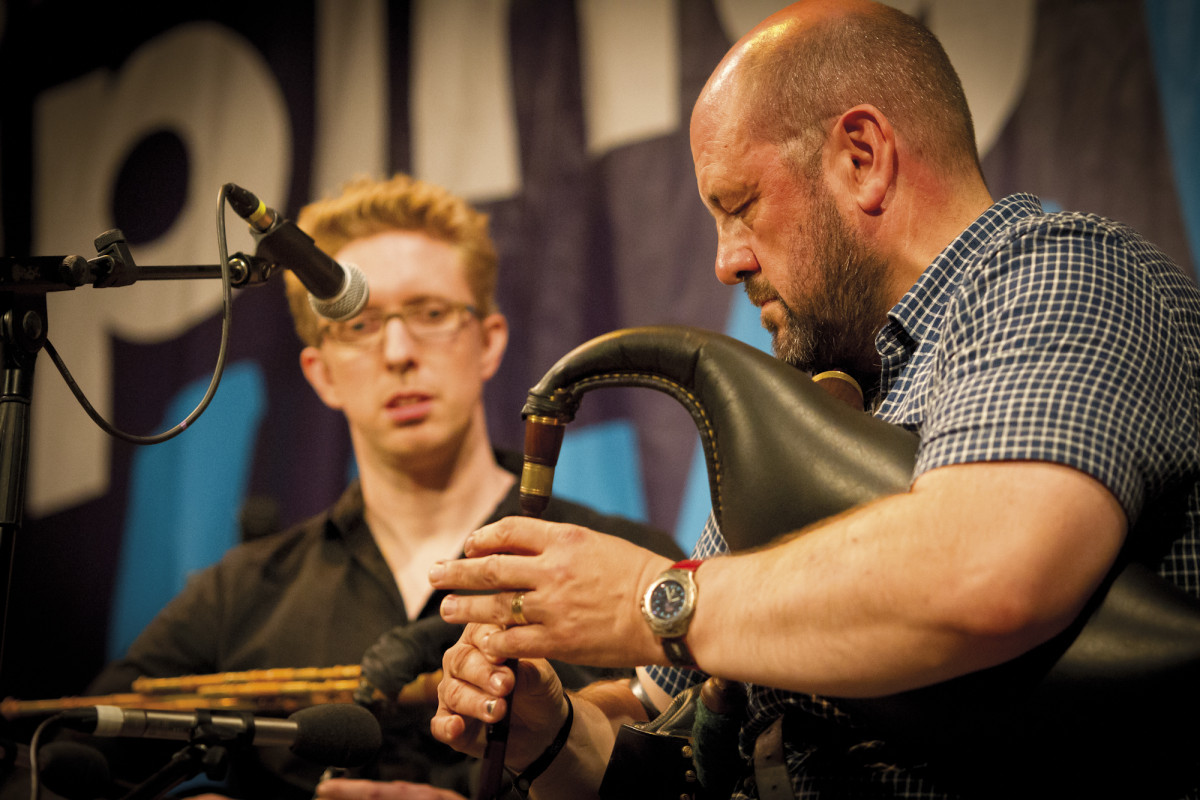 The Lowland and Border Pipers' Society present a very special evening of programming on Sunday 8th August, celebrating the music of bellows pipers.

The LBPS brings you an exciting blend of tradition and innovation in this celebration of the music of the bellows bagpipes of Scotland, past and present. Featuring some of the finest and most experienced players of those instruments from across the nation, commemoration is very much in the air, as we pay tribute to two key figures of the bellows revival who have sadly passed away of late, Iain MacDonald and Nigel Richard. And in the very week of the 250th anniversary of the birth of Sir Walter Scott, we take you on a journey in music and song to the banks of the Tweed, featuring a range of the wonderful ballads he collected – expect tales of love, honour and revenge aplenty! We can’t wait – do join us as we offer you More Power to Your Elbow!

Fraser Fifield  While trained in the deep traditions of highland piping, Fraser is a multi instrumentalist who has developed a reputation as a composer and innovator of truly international standing. With bellows pipes, highland pipes, whistles and saxophone included in his arsenal of instruments, he always brings us musical delights of all kinds. Expect the unexpected!

Annie Grace In the parlance of the world of theatre that she knows so well, Annie is a ‘triple threat’ – a musician, singer and actor of the highest order! In great demand the world over in all of these roles, she has toured widely with the National Theatre of Scotland and most recently as a central character in Sting’s blockbuster stage production, The Last Ship. One of Scotland’s finest interpreters of traditional ballads, Annie takes a leading role in our celebration of the 250th anniversary of the birth of Sir Walter Scott.

Stuart Letford  A member of the Vale of Atholl Pipe Band and writer on all things bagpipes, Stuart is also a very fine player of bellows pipes and makes a central contribution to the work of the LBPS behind the scenes. Stuart will join us in our musical commemorations this evening.

Anna Massie  One of the finest fiddlers and guitarists in Scotland today, Anna is without doubt a national treasure, and adds a touch of class to any performance! We’re delighted to welcome Anna to join us in her role as ‘the house band’!

Finlay MacDonald  As Director of the National Piping Centre in Glasgow, Finlay is leading the way in the onward development of all forms of piping, and is of course an exceptional  player of international standing in his own right. We’re delighted that Finlay has accepted our invitation to join us to help pay tribute to his late father, Iain MacDonald.

Dougie Pincock Ex Battlefield Band stalwart and key figure in the early revival of smallpipes, Dougie has for long been at the forefront of the folk scene in Scotland and far beyond, and as an educator he has led the way in helping to develop new generations of performers as Director of the National Centre of Excellence in Traditional Music at Plockton. As just one of his contributions, Dougie will lead our tribute to his friend and erstwhile musical partner, the late Iain MacDonald.

Gary West   Although he learned his piping in his native Pitlochry through the Vale of Atholl Pipe Band, Gary took to the bellows early in the revival in the mid 1980s, and has taught and performed on the instrument in many parts of the world. As presenter of BBC Radio Scotland’s Pipeline programme, he talks about piping rather a lot – but likes to think he can still play a bit too! He was delighted to have been inducted into the Scottish Traditional Music Hall of Fame last year, a sign, he says, that he must be getting on a bit!

The Street Cafe is jsut outside on McPhater Street, so join us there.